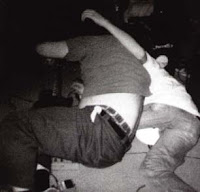 For those unaware Stars Are Insane is a home recording "solo" project that  I have been doing since 1998. The bulk of the material has been recorded by myself via four track but I have had accompaniment and collaboration at times on the recordings and for live performances. Through the six albums (as well as whole slew of unreleased stuff) I have done under the name I have channeled the influences of shoegaze, lo fi, Shrimper Records, tape labels, Sebadoh/Sentridoh, My Bloody Valentine and Dump amongst others. From 1999 to 2001 is when I was most active with the project mainly because of the laid back and secluded living situation I had at the time. In those years I released four full length cassette tapes as well recorded a unreleased album. At this point Stars Are Insane only existed in a live forum on a limited basis doing a few acoustic shows. But for the most part the Stars Are Insane project was mainly just a home recording project  to do the things that I felt I couldn't do with a band.
For the third Stars Are Insane album Justin Age 8 I collaborated with my friend Jason Cassara. After we finished recording the album we decided to test the material out live and the album I present to you here today is a recording of the first show that he and I did. Live Reading, is a name I devised to formally document our inaugural non solo performance at North Shore Public Library on July 7th 2000. Personally, I couldn't think of another venue back then that would have be as inviting for a project like this to exist in a live forum. A few of the songs "Big Circles, Moons and Stars" as well as "Gravity" were included on the So. I Dreamed of Noise four cd-r set that collected the first four albums as well as unreleased and live material. Additionally, the version of "Fuck Lando and His Gambling Problem" that appears here is the same that appears on Justin Age 8. Cassara and I  did a few more shows together and later on even did a couple with Dave Armone involved in the fray when the fourth cassette, Gay came out.
I don't want to rant on to much about my project but just the same I would like people to check out the music. Most of the releases are out of print, though I have a brand new cd-r called A Plan...A Perfect Disaster out now, though half the pressing is already gone. A "selected works" cd-r called Partial History  will be coming out soon. I shall post the complete discography below with links to the Bandcamp so you can at least stream everything. All the albums are on Last FM as well. I'll be working on music for new releases for later this year. If anyone out there is doing a compilation please let me know as I'd love to contribute something.
One last thing before I go...I didn't have any photos of Stars Are Insane shows so I posted a photo that I believe Jon Kaplan took at a show at The North Shore Library that Book Store and Bo Coach played. I was playing Velvet Underground's "Heroin" with Bo Coach and at the end I believe I ran into the audience and tackled Joey from Book Store to close it out in chaotic fashion.
Stars Are Insane Discography:
Stars Are Insane Live Reading 7/7/2000  track listing
1.The Admiral
2. Big Circles, Moons and Stars
3. Gravity
4. Those Are the Most Deadliest Scorpions I Have Ever Seen
5. I Stayed Up All Night Thinking of You (New Wave Reprise)
6. I Hereby Make An Anatomical Gift
7. Fuck Lando and His Gambling Problem
Download Here
Posted by soniklife at 11:40 PM