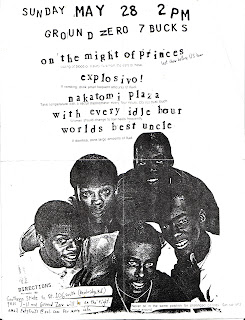 Here is double shot of On the Might of Princes stuff pulled out from the archives. First is a flier for the going away show for what was the send off of their first full US tour with Contra. Man, what an awesome show this was. On the Might of Princes as always was just incredible. It sounds silly but there was knot in my stomach because I at the time I couldn't bare the thought of going six weeks without seeing them playing. Back then it seemed like they were playing somewhere locally every weekend-trust me I do realize how fortunate I was to be able to see this amazing band week after week.after week. The same could be said though about a lot of bands. A funny story about this flier is that when On the Might of Princes was taking a lunch break while recording The Making of a Conversation at Paris Studios in Ronkonkoma the band ducked into a record store that was across the street and in there was a bin of promo flats and empty 45 sleeves for free. In there was this New Edition 45 sleeve, guitarist/vocalist Jason Rosenthal laughed, took it and months later I see it turn up again as this flier that I have posted here.

And the second bit of OTMOP rarity that I have for you today is a full live set that was done on the air at WNYU 89.1 FM in New York sometime in  late 2001. It was recorded by Steve Roche from Off Minor, who recorded a bunch of great on the air sets at WNYU in this period of time. At the time On the Might of Princes embarked on a few short tours/weekend trips with Massachusetts' screamo/emo band The Last Forty Seconds (pre Saddest Landscape/Her Breath on Glass) and this stint on WNYU was indeed one of those as Last Forty Seconds played on the air as well. Sadly, I don't have those tracks- if anyone has them feel free to send along.

The tracks captured on this performance document what On the Might of Princes were sounding like in the period that Where You Are and Where You Want to Be was out and about. The cool thing is that the set also captures the track "Go Fuck Yrself" when it was still a new tune. The version of The Water vs the Anchor on this set was previously released as a bonus track on the CD reissue of Where You Are and Where You Want to Be on Rok Lok Records and Eugenics Record Label. Now I am stoked to share with everyone the rest of the set. On the Might of Princes fans are just as passionate about the music as the band were so I always enjoy giving fans something "new" to sink their teeth into. Additionally, I'll have some more OTMOP live sets/rarities and related projects being posted in the future.

On the Might of Princes "Live on WNYU"
1. The Water vs The Anchor
2. Go Fuck Yrself
3. Thirteen Cheers for Beer & Bullshit
4. Old Wives Tale
5. For Meg