Smash the State...Not my House 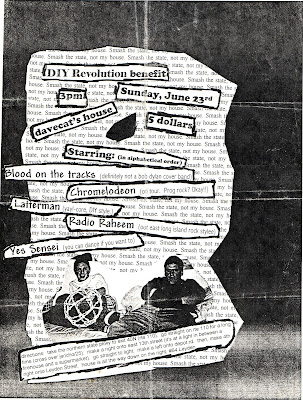 It has been awhile since I have done one of these... Here is a flier for a show that Yes Sensei's original drummer set up in his back yard.  It was a lot of fun. A beautiful Long Island summer outdoors show with solid tunes. If I remember Davecat's mom fired up the barbecue too which was always stellar. Man, did Yes Sensei miss moving its practices to Dare where there was not any barbecue to be had. Davecat threw a drum stick at Paul at this show for forgetting how to play the then just new tune "Progress is Dead" which is one of the few times I have seen Paul genuinely pissed off.

This was the first time that we played with Chromelodeon whom were buddies of Dave from his days at Temple. We played them a bunch back then and it was always fun. They came to Long Island and we went to Philly both a bunch.

Radio Raheem played  and if memory serves me correct they barely got half way through their set before the fucking cops shut it down. Playing with Radio Raheem back then was for us a real treat as finally we didn't feel like the black sheep of Long Island music. In them we found sonic and spiritual brothers. Also they gave a whole new meaning to being eastern Long Island band. I mean fucking Quogue? Soundly I didn't sound as out east anymore being from Rocky Point. They had me beat by another 45 minutes east bound for sure. They eventually changed their name to Rahim and released a couple of records on French Kiss, however still managed to rule. Even though they stopped playing "Aloha" (and the rest of the Radio Raheem era tunes). Though, props for them actually playing "Aloha" when the opened for Les Savy Fav at the Bowery Ballroom.

I will be uploading some Radio Raheem VERY soon but in the mean time here is a Rahim track called "One At a Time" from their Jungles EP:
Download RAHIM "One At a Time"