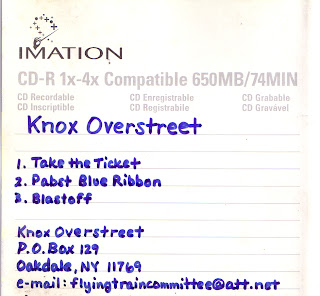 Just the other night my girlfriend and I were watching Dead Poets Society, which reminded me that when I got back to the blog posting I needed to upload some more Knox Overstreet so without further delay here is the band's "demo" from 2000. And I say "demo" because I am not entirely sure if these songs were ever formally released. When I was putting together The Hope Machine compilation and I asked Knox Overstreet for a track bassist Owen Antku gave me this cd-r saying that "it was their new demo and I can use whatever track I liked". I ultimately chose to use "Take the Ticket", which became the lead off track on The Hope Machine. These songs certainly floated around on tapes and burned cd-rs  among friends but I never saw an official demo at shows. Like I said in my previous post about their 2003 demo, Knox Overstreet were not the type of band that shilled themselves with merch or going out of their way to do anything other than write good tunes and have a good time. While on one hand I found it refreshing on the other I found it absolutely maddening because they were certainly a band that I felt more people should've known about. The three songs captured on this demo showcase the band in their earlier stage where they definitely had a emo/indie rock, Garden Variety-esque vibe to their song writing. In a weird way at times I can kind of hear a guitar sound that I would later identify with bands like Life At These Speeds.

As a bonus I have included the track "I Shot the Clerk" which was recorded around the same time. It came out in 2000 on the It Certainly Was a Grand Piano compilation via the Abominable Records label whom also released Knox Overstreet's "Jammer Failed b/w Coming Around" 7 inch which I shall certainly upload once my vinyl ripping gets up to par. I am almost there and I will certainly be uploading a bunch of rare Long Island vinyl and many more tapes in the coming weeks.

And I just wanted to add a few more thoughts...in looking at the "cover" for the Knox Overstreet "demo" I glanced at the bottom and saw the email contact which was actually for Owen Antku's other band, Flying Train Committee which was a Samiam/Knapsack sounding project that he and Lord Humongous' Ned Overton (guitar) and Mike Simensen (drums) were a part of. Seeing that reminds me of a few things; the first if anyone has any Flying Train Committee recordings PLEASE send them my way (not sure if any of those guys read this blog or not) as I never got any though I recall pestering Ned a few times. And secondly, I absolutely loved going to and playing shows with Knox Overstreet, Flying Train Committee, Music/Casa Negro, Lord Humongous, With Every Idle Hour, and Intransit as there was no scene bullshit or whatever; it was always just good times. All those bands were awesome musically and had some of the coolest, most down to earth dudes. When I look back at shows and especially the early Yes Sensei shows; I feel pretty fortunate to have been able to have one of my projects welcomed into that fold of bands.

It Certainly Was a Grand Piano comp
4. "I Shot the Clerk"