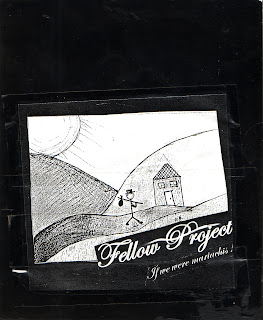 This isn't the first time that I have posted about Fellow Project and it most likely won't be the last, though I probably won't share much more because I don't want to be sharing titles that are still readily available. The Watch It and this album If We Were Mariachis represent the bulk of the rarities in the band's discography mainly due to the limited nature of the "pressings". And since it is the season of giving I implore you or any lover of good music to head to a few of the links I shall provide below and pick up some of Fellow Project's available records for a loved one or even as a gift for yourself. Like, I mentioned in my previous post about Fellow Project, they are essentially the only band that I have written about that is still active so be a sport and support their music as well as the labels who continue to support them.

On Fellow Project's sophomore effort If We Were Mariachis the trio continued to explore the anthemic folk tinged indie rock but this time around some "mathy", more dynamic tinges were thrown into the mix hinting at would the band would later (and currently) be known for. Watch It! was a solid start for the band as it showed that; yes a band with a acoustic guitar can rock but overall If We Were Mariachis is a far stronger record as it really documents a band get settled into its niche groove. The songwriting is top notch and honestly, I am amazed at how well the bulk of this album holds up. To me, one of Fellow Project's greatest strength as a band has been the lyrics and vocal arrangements but also the seamless juxtaposition of more straight forward, anthem rockers next to more in depth, introspective dare I say "musician's rock". Fellow Project has always had a knack for writing really smart music that has been able to still be fun and not take itself to seriously. They are one of those bands whom I feel really fortunate to have seen play live many times (at least 100 times at this point) and watch them develop over the years with new recording after new recording.

Quite honestly, I don't think I have ever heard them write a bad song. There maybe the odd track or two that won't hit me as hard as others but still the songs and ideas are always of high quality. Stand outs on If We Were Mariachis for me get going right away with the opening track "3 Left Turns Created a Monster" with it is insanely catchy chorus with the lines "Let Me Die Quick/Let Me Die Quick/ And Painless" always makes me want to sing along. "Dangerous" is a great folky indie rock romp. "The End" has one of the most beautifully haunting guitar melodies I have heard come from a Long Island band that out of nowhere picks up temp and goes in a unexpected direction. And the way the flute and vocal harmonies are weaved in are just wonderful. "Perfectly Subtle" is a morose acoustic ballad that reminds me so much of Simon Joyner- and when has that ever been a bad thing?? And easily, the curve ball of the album is the closer "Give Me More" that with its driving rhythm and picked note guitar playing and then the unexpected frantic scream towards the end is a tune that has always stuck with me.

If this was a just world where quality musicianship was rewarded there isn't a doubt in my mind that Fellow Project would be enormously popular-however it seems that they are just left to a select group of music fans that have excellent taste. Such is this unjust world.  With that being said please check out the following links to help make the world a bit more just; well at least for Fellow Project.

If We Were Mariachis track listing
1. 3 Left Turns Created a Monster
2. Dangerous
3. Shoot the Latter But Save Your Face
4. The End
5. The Myth
6. The End and The Myth
7. Evelyn What?
8. Perfectly Subtle
9. We Do the Best We Can With What We Have
10. Picapatas
11. Give Me More