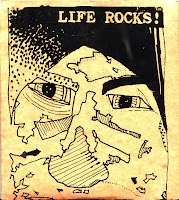 I think I have been pretty clear before about how much I despise folk punk. I never got it. I never understood the fascination with early Against Me or any period of Against Me for that matter...so I imagine it is a bit of a surprise to be sharing this album because Life Rocks and their lone release Our Minds Are Made Up-There's Going to Be Trouble is definitely a folk a punk album, make no mistake about it. Perhaps I give my friends a pass? Or perhaps there are actually some good tunes on the release? I am not known for just liking a friend's project just to be a nice guy because really how is that being supportive of their art by just just being a yes man or a body in audience. There enough pairs of deaf ears to go around why be another.

For those unaware Life Rocks was a project that consisted of Matt Canino (Latterman, Rvivr) and Ian Campbell (Bent Outta Shape) and it was a folk punk project where most of the tunes were focused around two acoustic and two sets of vocals, though there were a few numbers that involve more of traditional electric indie rock set up which are ironically some of the strongest offerings on the album. The songs generally feature poorly tuned acoustic guitars with shouting vocals that at times struggle to stay in key but that is pretty much what the whole charm about folk punk was right? The lyrics are generally focused around a very idealistic, youthful Peter Pan kind of thinking that I have hard time relating to any longer. Out of all of the releases I have shared thus far this is the one that I don't think has aged well as with me as a whole where I can spin it in any regularity BUT with that being said I do certainly believe there is still merit to be found. And more importantly, I know there a fans of both Matt and Ian's related bands who have never heard this and may appreciate it so that in itself is more than enough reason to share. Our Minds Are Made Up-There's Going to Be Trouble is a very honest document and proclamation from two young artists at a time where these songs and the ideas shared were very much alive not only in themselves but the people around them. The Long Island that is sung about in these songs seems like a world away and is just a very different place son in that regards it is hard to relate to. That isn't say that Long Island today doesn't have its own brand of dreamers and scene makers or what have you but there is no arguing that it is totally different.