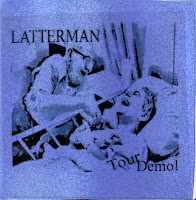 For the Latterman completists out there here is rare little piece of the band's history. I know guitarist Phil Douglas  dreads knowing that I have this cd in my possession still. Every now and then to get a reaction out of him I'll pull it off my shelf. I think it has something to do with it being one of his earliest recording efforts. It definitely doesn't sound bad at all and it in terms of recording and song writing quality it is leaps and bounds over the band's previous offerings. What more could I possibly say about Latterman that hasn't already been said here or anywhere else for that matter? For those that really need more info, to put things as simply as possible next to On the Might of Princes-Latterman was one of the main reasons that the DIY scene on Long Island thrived so much in the late 1990s and early 2000s. It could certainly be argued that Latterman was met with even greater "success" with their later albums on Deep Elm.

This demo was put together for a US tour in 2001 and it served as a preview of what becoming on their first full length Turn Up the Punk We'll Be Singing as the four songs presented here were all re-recorded for the album which would be released later that year. As a tour demo it certainly does its job in documenting Latterman at that point in time and sharing that folks they encountered on tour.

Latterman "Tour Demo!" track listing
1. Rebellion Vs The Alarm Clock
2. There's No Wrong Way to Do Punk (You Clown Doctor)
3. King Tough is My New Idol
4. For Someone Easy Going You Sure Do Seem to Wear Pants A lot