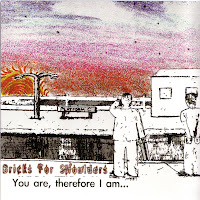 A good chunk of the releases that I have been sharing here I have reviewed at one point during my tenure as a writer at Under the Volcano magazine; and only know am I realizing that it would be cool to perhaps include those  reviews and mix it with current thoughts about the releases to see how time has affected my opinion on a release. Perhaps this weekend I'll find the time to pull out some reviews for some upcoming uploads. And I thought of this because I definitely recall reviewing Bricks For Shoulders You Are, Therefore I am and for some reason I think while I gave it a overall positive review I do believe that I did some critical nitpicking; perhaps getting on a journalistic high horse or something. Regardless, I honestly can't recall if that happened or if my mind is playing tricks on me.

Bricks For Shoulders was a band that morphed out of Prescott C; who while had some glaring similarities to their later self Prescott C was a bit more melodic whereas Bricks For Shoulders was certainly more aggressive as well as technical. At some point in Prescott C's tenure they transformed (albeit not by choice) to a guitar and drums duo and if my memory serves me correct Bricks For Shoulders was started not only as a stylistic change but because after many trials they found a bass player in Zach (ex-With Every Idle Hour) to have a solid three piece lineup. However, that was short lived as guitarist/vocalist Steven DeJoseph and drummer/vocalist Tom Crooke would carry on once again as a duo. I remember watching these guys play and it was always awesome and way loud. Like seriously loud. DeJoseph would play his guitar through a guitar cabinet and a bass cabinet on the opposite side of him all while screaming and howling like a maniac. Like I said, very loud and lots of low end. All of this while Crooke would pound away at his drum kit as if he were mad at it. Really mad. Musically speaking Bricks For Shoulders cherry picked elements of post hardcore, post punk, hardcore, screamo to make it their own. I hear a variety of bands influence in their sounds- Four Hundred Years, Sleepytime Trio, Castor, Smile, and even Hum. Though the latter's influence while there it isn't as apparent as it was in Prescott C. Maybe it was just me but I always felt these guys never got enough props from folks in the "scene". Solid musicianship, always tight as hell live and too boot good people-what's not to like? Fucking kids...

While Prescott C was fairly prolific with several releases under their belt before packing it in, as far as I know You Are, Therefore I am... was the only formal release that Bricks For Shoulders had though Crooke has informed that there was some unreleased material. If I can get my hands on it as well as have the band's blessing I'd be happy to share it. I shall be uploading some Prescott C in the coming months. Dejoseph in addition to playing guitar in Bricks For Shoulders/ Prescott C is also a very talented drummer and assumed the kit in Pretty Polly and for the last several years has been playing the band Playing Dead. And Crooke plays drums in Dude Japan and also creates music with him playing all the instruments under the name Swell As Hell. Check it all out.

Bricks For Shoulders You Are, Therefore I am... track listing
1. You've Got to Be Kidding Me
2. Non Prescription Glasses and Your Star Tattoos
3. Art and Narcissism
4. Segway
5. You Should Treat Your Kids as Well as You Treat Your Cars
6. You Fill in the Blanks, While I Load My .357
7. End of Transmission