Guadalupe "Contract the Stank" cd (Burn It Down Rebuild/2004) 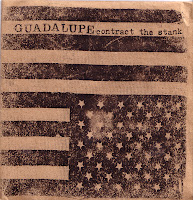 It so cold out so I need something energetic to keep me going. Coming into a freezing cold office sucks but rocking out to Guadalupe's Contract the Stank for the first time in a long time certainly does not suck. Around 2003-2004 I started to notice that there were a lot of kids in the Northport area giving the Long Island DIY scene a real shot in the arm. It felt young and exciting again. And that is not to say that there weren't exciting things amongst my peers but perhaps there was some jadedness starting to peer through as at that time lots of people/bands who made Long Island DIY such a vibrant creative community in the late 90s-early 2000s started to or had already flocked to Brooklyn. In Northport shows were packed with kids, there were several solid bands and kids were making cds/tapes/zines/etc. And doing it all with a passion for living in Long Island which is something that really appealed to me as I have always loved living in Long Island and have not had the same scorn for it the way some others have. Sure, there are aspects of living here that suck but that is relative. Travel around the country and talk to people and you'll know what I mean.

Anyhow, one of those bands was Guadalupe who were DIY hardcore/punk off shoot of the Northport indie rock band For Those Who Can Not Wait. I remember going to a show at my now house wondering whom all these kids I'd never met or seen before were and that is when my buddy Jon Contra was like "That's Guadalupe and they rule". Or something to that effect. Regardless, he was right. It was fast, exuberant and fun. It wasn't rocket science by any stretch of the imagination but it was perfect. Songs about friends, DIY, bike riding, cops and of course "stealing shit from other boats". It was just fucking fun and I loved it. They also did pretty rad Minor Threat and Body Count covers. Yes, THAT Body Count. 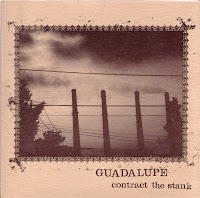 According to the liner notes Guadalupe spent two days with Phil Douglas (from Latterman, Iron Chic) the fifteen songs that appear on Contract the Stank. Fifteen songs may seem like a lot but don't blink because the record can be over just like that. Remember this is hardcore punk we are talking about here. Anyhow, Contract the Stank was made originally as cd-r in the brown paper bag upside down American flag on Burn It Down/Rebuild. Later on Burn It Down/Rebuild pressed as "real" cd release with different artwork. I prefer the artwork on the original cd-r release as opposed to the cd as the cd version's artwork reminded me far to much of the cover to The Insurgent discography cd. To each is their own. To my knowledge this was the only release that Guadalupe had though I do recall them recording tracks once at my house for a 7 inch though I am not sure if that ever materialized. I do know that guys from Guadalupe went on to be in a few other bands like Nude Beach, Dustheads and Yellow Tears to name a few.

Email ThisBlogThis!Share to TwitterShare to FacebookShare to Pinterest
Labels: Burn It Down/Rebuild, DIY punk, For Those Who Can Not Wait, Guadalupe, Kiss the Dirt, Nude Beach