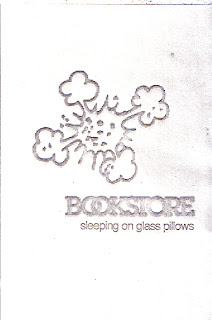 Well here is nice little rarity, one that I wasn't sure ever existed until my good buddy J-Ro gave me a cd-r copy a few years ago and confirmed that yes,  his brother Matt Orphan did indeed release it as a tape on the mighty Eiffel Trousers Records label (whom I will speak more of later on). I knew of these songs because after chatting with Book Store bassist Jon Kaplan in a AOL chat room he sent me a tape with these songs on it but I wasn't aware of the "formal" release. The band never had them with them at shows or anything so I imagine to most this release was or is a mystery. I am not sure why that is. Maybe they weren't happy with the recording or something as it does have a fuzzy, lo fi quality to it but to my ears it sounds just grand. I do know that this recording features Book Store's original drummer Lou S. so perhaps that was a reason. Strange...

In any event out of the five songs presented here four were re-recorded for the self titled cd on Rok Lok Records (why yes, I still have some available...). Aside from some songs I think sounding better here than the album for my own personal aesthetic reasons; particularly "Dreamy" which is played a little faster and for the better; what makes Sleeping On Glass Pillows a point of interest for any Book Store fan is that it is the only place to get the song "Maggie Cassidy". It was a short lived song that I only saw the band perform once in the many, many times I saw the band while they were together. And the record nerd in me just loves stuff like that-forgotten tracks or rare exclusive comp or demo tracks. Sometimes when that stuff is dug up it is golden and while "Maggie Cassidy" certainly isn't the best song Book Store wrote but is definitely a strong slice of indie rock that far outshines some other tunes that the band played throughout their life span. In a way I am curious what this song would sound like if they kept playing and re-recorded it for the album like the did with the others. All in all, Sleeping On Glass Pillows is perfect basement indie rock to tap your toes to.

As a bonus I have included the original, and superior version "Gonster" that appeared on The Hope Machine compilation. Not that I don't like the version that opens up the self titled album I just find this version to have more energy, and I really like the guitar tones much better as they are really fitting for the song. Also I prefer the extended hyper jam outro presented on this version as opposed to shortened version on the album that went back to the verse, or "Radio Friendly Gonster" as some of us called.

And to wrap this post up I just would like to share a few thoughts about the label that released this tape and many other great releases through the mid to late 90s, Eiffel Trousers Records. This was the label that was started by Matt Orphan of The Microwave Orphans and with Eiffel Trousers Matt was able to mash together the label influences of Lookout Records, K Records, Kill Rock Stars and Shrimper to have nice diverse roster of releases. From the new wave tinged punk of his own Microwave Orphans as well as the Space Robot Scientist. Ska/surf/pop of Freaks from the Apocalypse. Melodic pop punk of Supermatchboxx, Embarrassing Wrecks, Whoopie Cushion, Milton, and 48 in the Basement,  4 track weirdness of Caroline's Pneumatic Drapery, Tork & Co., indie rock of Book Store, The Mutes Brothers, and Potbelly Bandits- Eiffel Trousers always kept it interesting from release to release as you never knew what you would get. And let's not forget, Eiffel Trousers Records was responsible for releasing the second pressing of the On the Might of Princes demo. No matter what your personal thoughts of each band were, there was no way you couldn't appreciate the sincere aesthetic that Eiffel Trousers was able to convey with every release.

Honestly, when Matt stopped showing up to shows with those shoe boxes of tapes a part of me felt rather empty. And that is not to take anything away from anyone, it is just Matt was the first person I met in the Long Island scene that was into the same kind of weirdo indie rock that I was into. He knew who Sebadoh and Shrimper Records were which as silly as it sounds that was huge for me at the age as I wanted to play in a band more than anything and finding people that didn't want do a pop punk or hardcore band back than was very, very difficult. If you said Sonic Youth or Jesus Lizard or Pavement to anyone- they laughed and would proceed to tell you that NOFX is the greatest band ever. Times have certainly changed...Matt introduced me to people who I'd later go on to create music with and essentially the core of the creative circle that I travel in so for that I am very grateful.  People reminisce a lot here on Long Island about many old bands, venues, and labels but I always feel very few people give the proper due to what Eiffel Trousers Records did in releasing music and coordinating shows in the mid to late 90s. Matt here is to you my friend, thanks for all that you have done over the years. Since I have finally have a reliable set up to rip cassettes I'll certainly be uploading more of the label's discography in the coming months. For those interested Eiffel Trousers has a old Myspace page that is still up, check ahoy

and then "Gonster" from The Hope Machine