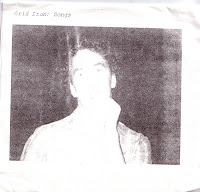 It is Friday so that means it will be a quick post. Always too much to do on Friday! Anyhow here is a small release from Grid Iron, a 3 song ep that is definite improvement all around from their demo, which I liked a lot but definitely was a little rough around the edges especially in the recording department. The production values were stepped up for this batch of songs and also the song writing/performances were improved. Joining vocalist/guitarist Byrce Hackford on this collection of songs is the line up that included Adam Kuhn (Fellow Project/Small Arms Dealer) on drums and Mike Campbell (Latterman/The Brass) on bass and would ultimately be the line up for the rest of the band's life. In my previous post about their demo I stated that the only releases that existed were this cd-r ep Songs and the full length Quieter,Confider but in searching for stuff the other day I came across a generic cd-r labeled "Grid Iron 6 songs" that had songs that for the most part with the exception of one or two that weren't on any other releases. If my memory serves me correct this could've been the batch of songs that Bryce gave me for the proposed split cd w/ Yes Sensei that got scraped because we had a line up change, scraped the recording and opted to re-record our tunes for our second album. In time I will most likely upload those tracks as well.