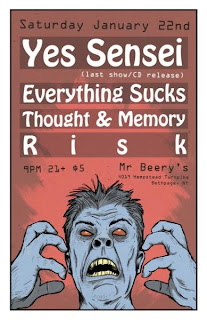 I just wanted to interrupt our normal broadcasting to pimp something as equally as important to me as all of the bands and releases that I have shared with all of you these last few months. A little over ten years ago myself and a couple of friends started the band Yes Sensei to create a type of music that we weren't hearing locally. The band went through several line up changes over the years and had the great fortune of releasing a few albums, a 7 inch and make some compilation appearances. And now the time has come to wrap it all up and put a little bow on it. It would mean a lot if people came out to say goodbye. It will also be the release show for our our fourth and final album In Excelsis.  You can stream the album here at Bandcamp:

We shall be playing our last show next Saturday at Mr Beery's with friends Everything Sucks, Thought & Memory and Risk (ex-Scent of Human History/United States). If all goes well we shall have copies of our brand new album In Excelsis with us.

While personally I have been comfortable with putting the beast to rest so to speak for awhile now, yesterday was the last practice I think now finally it is starting to sink in that a large chapter of my life is about to come to a close.

Here is a run down of our discography, most of which is still available at Rok Lok Records

compilation appearances:
-"Russian or Retarded" on No Nucleus cd (Tone Library)
-"All of Your Bass Are Belong to Us" on Dead Broke Tape Comp Volume 3 cassette (Dead Broke)*exclusive track

Also later this year another cd filled with unreleased, demo, live material as well as the 7 inch and comps tracks will be released on Rok Lok Records
Posted by soniklife at 9:25 AM