On the Might of Princes "Demo" cassette (self released/1998) 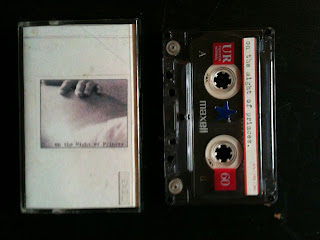 In 1998 I created my label Rok Lok Records to release this band's first album so it is only fitting that On the Might of Princes is the first entry in this blog. My earliest exposure to On the Might of Princes was only a few months into their existence and it was solely by chance. They happened to be sharing a bill with a band that my old AOL chat room buddy was in called Bunsen Honeydew at Cedar Beach, which was a "venue" that the North Shore Youth Council allowed young people to book their own live music events in the summer months to keep youths out of trouble and that sort of thing. Anyhow, On the Might of Princes performed and I was absolutely blown away. It was just so raw and it hit me on a personal level that I couldn't fully explain-to put it simply I had never seen anything like it before or since. And this feeling continued in the subsequent times that I saw them over the next few months and eventually years. At some point I mustered up the courage to approach vocalist/guitarist Jason Rosenthal express my appreciation of the band's music and invited them to take part in some shows that I was booking. It was the beginning of what I would like to think of as a long, healthy as well as creative friendship with the band. After a few shows it was clear something truly special was taking place, there was an electric feeling going on in the Long Island scene and while not take anything away from any other bands, On the Might of Princes have to be given a large amount of credit for their contribution to making the scene at that time so vibrant. Bias aside, their influence can not be undermined. While screamy hardcore and emo had already made its presence felt on Long Island via bands like The Last Crime, La Magna, Scapegrace, The State Secedes, Half Man, to name a few- I don't think a band had meshed such a strong sense of pained melody with visceral, discordant emo/hardcore the way On the Might of Princes did. Perhaps the only other Long Island band prior to them that did something similar was the wonderful (and very under appreciated I may add) Garden Variety.

With all of this excitement it seemed as if it was a good enough time to record a demo. So in September of 1998 On the Might of Princes with microphones hanging from the ceiling of guitarist Lou Fontana's parents' basement, the demo was born. I imagine like many demos, it was recorded over the span of a weekend or maybe two. And I remember vividly when Jason gave me a copy of the demo, I must have listened to it at least a half dozen times in the first sitting. Over the course of the next several months I listened to the demo almost non stop. At the time I worked the closing manager shift at a local McDonald's and I couldn't have had a better soundtrack to get me through those nights than the On the Might of Princes demo. A co-worker at the time commented saying "this band is good but don't you own any other tapes?", which I guess illustrated how much I did indeed listen to the tape. Personally, I was at that post high school crossroads and amidst all the confusion in my life at the time hands down On the Might of Princes' music was the only thing that made sense, and to this day I don't think I have ever experienced anything as cathartic as seeing them play live. Eventually I released their debut album The Making of a Conversation in 1999 (later re-issued with bonus tracks in 2007 including "Drunk & Missing Vital Parts" and "An Allusion to Italy" from the demo) and the band continued to progress and earn themselves accolades with their second and third albums, Where You Are and Where You Want to Be (Traffic Violation/Creep and later Rok Lok Records/Eugenics Record Label) and Sirens (Revelation). The rest they say is history...
Originally the band self released the six song demo and also contributed a exclusive track taken from the same sessions, "Water Wings" for a tape compilation called Strong Island that myself and friend Phil Wohl released to document some of the bands we were booking. Months later after the original batch of demos were sold out a new pressing on local label Eiffel Trousers Records were made that included "Water Wings". A cool thing about the demo was that it was the first time anyone really heard the song "A Shadow Taller Than You", which hadn't been played out live at that point and it was just a song that I felt would go on to really define that time period for the band. Also that song, in my opinion would pave the way for some of the things they'd do later on. I know the vast majority of On the Might of Princes fans are more fond of the later stuff but I don't think anyone can deny the rawness, and gut wrenching sincerity that is captured on the seven songs on this demo. From a historical point of view the demo I think perfectly documents what On the Might Princes and the respective time were like. Still after all of these years I love the entire demo but stand outs for me are "Water Wings" which has always been and always will be my favorite On the Might of Princes song. It is just so simple and endearing while the distortion overload of the guitars is one of the most beautiful messes I have ever heard. And still to this day the original version of "An Allusion to Italy" sends chills down my spine. There is personal charm and warm aesthetic on the demo version that makes the version on Where You Are and Where You Want to Be sound rather sterile.you be the judge.
I hope you have enjoyed the inaugural upload at Here on This Island and I look forward to sharing more with everyone in the coming weeks.


On the Might of Princes "demo" track list:
1. A Fond Farewell
2. Astoria
3. Anywhere in Europe
4. Drunk and Missing Vital Parts
5. A Shadow Taller Than You
6. An Allusion to Italy
7. Water Wings
download here
Posted by soniklife at 7:29 AM

Email ThisBlogThis!Share to TwitterShare to FacebookShare to Pinterest
Labels: emo, On the Might of Princes, Rok Lok Records, screamo