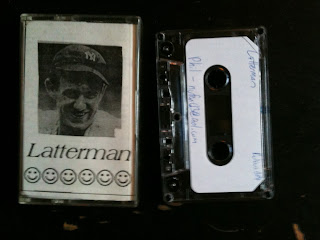 I'll be totally up front, aside from a few select bands I have never had much love for the pop punk genre. Personally, I feel so many bands focus on trying to be punk that they forget the pop part which for me means that your songs catchy and if you don't have the pop part I have a had hard time finding a lasting appeal or even short term for that matter. I love pop song sensibilities and the idea of getting a song stuck in one's head. One of the select few bands that make the grade for me in this genre are Latterman. Born from the ashes of the somewhat similar band Five Days Late whom I saw a few times and came to become very friendly with their guitarist Phil Douglas and bassist Matt Canino. I included them in a few shows that I was booking. One show in particular was for the cd release show for Exlposivo's The Uh Oh EP and as I was finishing the flyer I got a call from Phil saying that "Five Days Late was no more and that their new band Latterman was going to play". Cool. They made their way to the Shoreham Wading River Library to play the show and with goofing around and talking to each other as if there was no one in the room (actually the exact opposite!) by the time 15 minutes rolled around and before their fourth song the announced it would be their last one. Jokingly, I gave them hell and honestly this was one of the things while they may not look fondly upon I just loved. Those early Latterman shows felt like an inside joke but not in some elitist way, just friends having a good time. Heck, even by the time the band had a demo, ep, 7 inch and material which made up their first full length Turn Up the Punk We'll Be Singing, Latterman sets were like 4 or 5 songs at most. I once saw a 3 song Latterman and not because they were pressed for time. I swear after the second song when Phil announced they were only going to play one more I think I was the only person in the audience who realized he wasn't bullshitting. That was funny. And there was the show at the Hardware store where it was packed (sardine can packed) and it took M.R like 15 minutes of trying to tune his guitar by ear. Classic...

But shenanigans aside, Latterman also wrote great songs that also had great messages. And perhaps why I mention all the tom foolery is that while someone just casually listening to the band and learning they had a message could easily discredit them for being a band that was "preachy" or "too serious". Fact is Latterman was none of those things. Personally, I think it was awesome that there was a band that was singing about topics of real substance, and to put things in perspective Latterman was bringing forth their songs with messages of self belief, hope, positive thinking, embracing friends, and not letting life get you down all on the heels of American independent rock culture still clinging to some of the angst and self depreciation of the 90s. Yeah, there was certainly a level of idealism but it was a pleasant surprise and to quote Uncle Buck "I don't want to know a kid who isn't a dreamer". Also, it was just awesome seeing so many kids being drawn to this band and those messages. Furthermore, I don't think it can be undermined in how Latterman and just the presence they created at shows was very inclusive. It was the first time I saw a Long Island band actually take a pro active stance in regards to sexism in the scene and not just pay token lip service-they helped create a new environment at shows on Long Island and I have to say not only was it exciting and welcome but God damn it was long overdue.

So about this demo...The 4 songs captured here (some of which were recorded for later releases) showcase the band in its earliest incarnation not only lineup wise but in terms of sound which has some roughness on the edges but the inspiration, exuberance and sincerity as well elements of what the band what later become known for certainly shine through. Though, Latterman's second album No Matter Where We Go is firmly cemented as my favorite release from their discography, there certainly will always be a place in my heart for their early material.

I will certainly recommend that everyone if you haven't done so already check out some of the post Latterman projects like Iron Chic and Rvivr who are both incredible.


Latterman "Demo" track listing
1. King Tough is My New Idol
2. Too Many Emo Days
3. Seriously Guys We Can Rule the World if We Tried
4. An Ode to Jon Contra