Prescott C "Somewhere In the Distance" cassette (self released/1999)

Another quick post today folks...Here is the first release from Prescott C, a four song cassette called Somewhere In the Distance. It features the band in their original three piece line up with Angela on bass. I have uploaded releases by Prescott C in the past which I hope you have all enjoyed and in the coming months I'll be uploading more. For those that missed out Prescott C was the band that preceded Bricks For Shoulders and while still as heavy as that band there was more of a emphasis on melodic post hardcore type of stuff as opposed to the more aggressive flavor of Bricks For Shoulders. If you dig stuff like Hum, Far, Smile and Sleepytime Trio then you may dig Prescott C. Go ahead don't be scared, download it is free. And as bonus to make up for the short post here is a old flyer for a show that Prescott C played with Book Store and some other band I don't know. 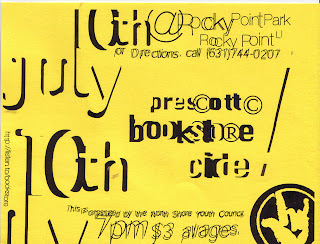