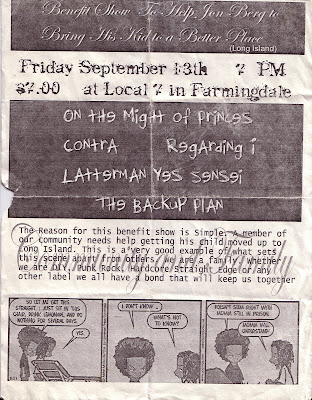 Seriously, everyone loves On the Might of Princes right? I don't listen to the albums nearly as much as I used to be even just a thought or mention of the band's name fills my head with so many thoughts and emotions. Who I was and where I was in my life when I discovered this band and how fortunate I felt to see a band this incredible from the beginning to the very end and even into reunions. But most importantly I am transported to a time and place in Long Island DIY that is long gone. And while there are great bands, great venues, and great people today doing stuff on Long Island for me on a personal level nothing feels like it used to back then. And I guess this flier that I am posting here today is a perfect example of what I am talking about. My buddy Steve booked a show at the Local 7 space to raise money so our mutual friend and someone who had given so much of himself to the Long Island DIY community, Jon Contra could be able to have his soon relocated from Florida back to Long Island. Specifics don't matter but what matters is that the Long Island DIY community came out in droves to have music lead to having a very positive effect in the outcome in someone's life away from the bands, basements, zines and potlucks. Sometimes we wrap ourselves up so much in the music, the ideas, the friendships, etc that we forget about the real world and it was awesome to see everyone come together to help a friend. It was such an honor to be playing this show which for me a I really felt was one of the high marks of the Long Island DIY community. In addition to On the Might of Princes, Contra reuniting, Regarding I, Latterman, The Backup Plan, and my band Yes Sensei, Scent of Human History played. This was a night that I will always remember not only for the great music but for the great reason that the show happened and how it was able to help.

For some audio content I have decided to upload a demo version of the On the Might of Princes song "Water vs The Anchor" that appeared on the Creep Records CD compilation The Last Stake Has Been Driven. It was recorded at The Creep House but it is a completely different recording than the version that appears on Where You Are and Where You Want to Be. I imagine when asking fans what is the song that best defines On the Might of Princes, and some will say "For Meg" and others, like myself will say "Water vs The Anchor". I say that because it is the song that hooked you in right away long before the album closer even came through your speakers. Everything about "Water vs The Anchor" is perfect as it showcases all the different musical genres that the band was primarily influenced by and it had great lyrics that were absolutely anthemic in nature. So check out this earlier version as I am not sure how circulated this comp that it appeared on was.

Email ThisBlogThis!Share to TwitterShare to FacebookShare to Pinterest
Labels: Contra, Latterman, Long Island DIY, On the Might of Princes, Regarding I, Scent of human History, The Backup Plan, Yes Sensei