Who wants to read some Howards comix??? 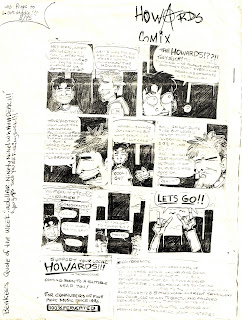 Here is one of those artifacts of Long Island punk's past where I asked myself how and why have I held onto this for so long? The Howards were one of the first punk bands that I knew to be from my neck of the woods in eastern Long Island. They played snotty, Screeching Weasel-esque pop punk and were based out of Port Jefferson. Here is a flier in comic strip form that was made essentially to get people out to shows and spread the word about their band. I picked this flier up probably at either Music Den or Alien Nation Skate Shop-both of which were in the Port Jefferson area. The Howards released a track "No Place Left to Go" on the Traffic Violation 6 Band Comp 7 inch which I have included below and also a split 7 inch w/ Checkerboard Charlie called "Kinda Port Jeff's Finest" which was released on Traffic Violation Records as well. You can download this 7 inch over Uncle Ron's Dusty Discs.

The Howards went on to form A Boy Called Spite, Explosivo!, The Devil Himself, Small Arms Dealer, Iron Chic and Wax Phantom. WHEW!!

Download "No Place Left To Go"
Posted by soniklife at 11:49 AM