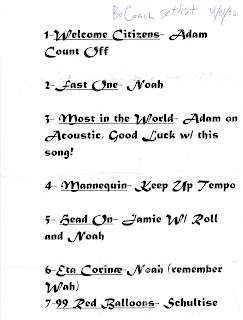 Here is a set list that I nabbed from one of the last shows that one of my favorite Long Island bands ever played. Bo Coach were a lo fi indie rock band that was based out of the Shoreham/Wading River area of eastern Long Island, which was a town away from my home town of Rocky Point. Bo Coach shows were always great because you never knew what you were going to get or what members would show up. It was always on the brink of disaster which was part of the fun and I guess which is why when they were on (which was just about all the times) it was an absolute beautiful mess to witness. Smart pop with almost new wave sensibilities thrown in with fuzzy noise that wavered in and out was essentially what Bo Coach went for sonically. So if you put The Pixies, Man or Astroman?, The Velvet Underground and Sonic Youth in a blender it would come out sounding like Bo Coach. Simply put, it was quintessential suburban indie rock. My first band Pale Marble Movie played with them a lot, and even one time we joined them for a raucous rendition of The Velvet Underground's "Heroin". I released their only formal release, The Mustard Tape as a cassette on Rok Lok Records in early 2000 and it remains one of my favorite releases. It has been out of print for awhile now though I may do a small repress some point as I'd really love to share their great music with a new generation of music fans. Bo Coach allowed me to include their song "Fast One" on The Hope Machine compilation and I have attached that song here. Enjoy!