Kiwi "Anarchists Have More Fun" CD (Burn It Down Rebuild/2003) 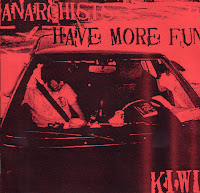 "This is about having a good time with my friends". Well said Kiwi.

Kiwi was a DIY synth pop/punk band that existed from around 2002 to maybe sometime in 2004. It was originally a duo that consisted of Matthew Winn (Wildebeest/The Fish) on synthesizer and vocals and Jesse Vargas (The Life of Crime/Jack Bandit) on drums/vocals. Later on Mike Campbell of Latterman/Grid Iron/The Brass played bass to turn the duo into a trio. I believe someone else played bass briefly but I am not 100% certain of that or whom it would've been. Kiwi played really fun, dance inducing bouncy synth pop that lyrics that centered around the exuberance and idealism of youth and DIY culture though there was also heavy political tinge to the lyrics that touch on consumption culture, corrupt politics, battling racism, sexism, and homophobia and of course songs about the fucking pigs. Mixing this rather serious lyrical content was dancey, grooving rhythms propelled by airy sounds of synth Kiwi certainly upheld the argument that, yes anarchists do indeed have more fun. Musically speaking if you dig stuff like Devo, Atom & His Package, Robotnicka, Math the Band and even local new wave synth driven locals Space Robot Scientists then chances are you'll dig Kiwi and their full length album Anarchists Have More Fun. It should be noted that the cover I have posted here is actually the cover of the booklet; as the cd and booklet were each housed a unique hand sewn printed fabric sleeve. Each one was different, mine came in a American flag print. I have seen some in flannel and even printed Cowboy art fabrics. Fucking tight.

As far as other releases are concerned to my knowledge the only other release Kiwi had was a split cd with The Lazer which I do not own so if someone out there could share those tunes with me I'd appreciate it. Kiwi were always fun and in hindsight they were the ultimate basement band. Listening to this cd right now makes me want to call them out of retirement to come and play show in my basement. Of course that wouldn't happen. I have to say one of my favorite experiences seeing Kiwi was at some basement in Northport where Jesse Vargas the band's drummer didn't show up but Matthew Winn and Mike Campbell forged ahead by recruiting Ryan Nadieau from Guadalupe/For Those Who Can Not Wait to join them for a unrehearsed impromptu set. Nadieau had never played the songs but fucking nailed it. It was such a fun performance; everyone was dancing and having fun. For me it came at a time in my mid 20s where I was starting to feel out of place at basement shows and just within punk in general but all of that was washed away with such a fun and care free set that Kiwi put on that night. Indeed it certainly was about having a good time with your friends.

Kiwi "Anarchists Have More Fun" track listing
1. Hopping Fences
2. With Friends Like These Who Needs Sleep?
3. All They Can Offer Us
4. We Don't Need No Borders, Let the Revolution Burn!
5. Honor Among Thieves
6. We Hate the Pigs Cause the Pigs Hate Us
7. Hopes, Dreams and Fears
8. Fun House Mirror
9. Who Needs Who?
10. Vitamins and Minerals
11. Dance on the Graves
12. Clap Clap Clap