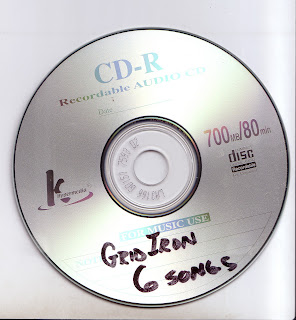 In starting to organize the recordings that I would be using in this blog I came across this cd-r in my spindle and I had no idea what this was because I never recalled  Grid Iron releasing a 6 song ep. And some of the songs sounded like they could have been different mixes of tunes on Quietly, Confider but there were also songs from the Demo re-recorded as well as two songs that I never recalled hearing before on a recording. Then it dawned on me and I am fairly certain I unraveled the mystery of these songs. This is what I believe to be the story here- shortly after Grid Iron first started playing they started teaming up a lot with my band Yes Sensei for shows. We liked them a lot and playing shows together were always fun. After we, Yes Sensei that is, released our first album What I Do Best is What I Do Worst in 2002 we started looking to the future and thinking about our next release. After some discussion it was decided that we'd do a split cd with our buddies Grid Iron each of us doing six tracks each. Grid Iron had their shit together and it didn't take them very long to get their half of the split together and it wasn't before long where drummer Adam Kuhn was pestering us (rightfully so) wondering when we'd record out tunes. And unless I am mistaken (which would sure make me and this post seem rather silly- what can I say but those years were my "drunk years" so the memory is a bit fuzzy at times)- at some point Adam handed me this cd-r which was to be their six songs for the split.

Finally, we set up shop in Yes Sensei bassist Paul Como's parents' house, ran cables everywhere and had a pretty good set up going. We recorded the tunes and it really didn't sound all that hot. Mostly it was my fault because I waited to the last minute to get a good guitar cabinet. Back then I hated recording and was more interested in playing shows constantly. Anyhow, we sat on that recording and were going to patch it up but eventually Paul left our little band and with Michael Parish assuming the bass role and weeks later Adam Vargas joining us on guitar we all thought it best to scrap the recording and finish re-working the five songs and discarding one from the band's library of tunes we had to make our second full length album which would turn into We Who Transplant Sustain; which meant that the long planned discussed split cd with Grid Iron went the way of so many youthful discussions and plans. And that is really unfortunate because in listening to these songs for the first time in years I realize what a missed opportunity I had to release a collection of outstanding songs on my label. I have a few regrets in my label history of projects that I passed up on or ones that didn't happen for whatever reason. I have been listening to this batch of songs a lot the last several days and all I could think was "man how did I NOT release this?"...oh well. Live and learn.

Grid Iron grew in leaps and bounds from their Demo and this collection of 6 unreleased songs is a wonderful document of band finding its footing and doing so in style. The level of songwriting and performance improved so greatly, even the two re-recorded songs from the Demo, "Tarry Under Docks" and "Crater Basin" sound like a different band. I highly recommend this batch of songs and this is easily one of the best uploads song writing quality wise that I have the privilege to share here. One last bit- if anyone knows the names of the two untitled tracks please pass those along. Thanks!