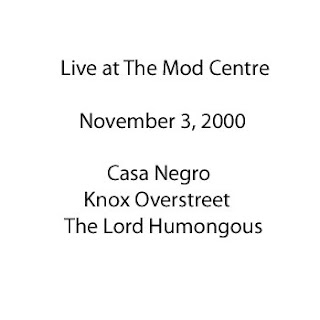 Through doing this Here On This Island I have certainly reconnected with a lot of people whom I hadn't seen in many years. Friends or just acquaintances whom I shared in experiencing all of this great music growing up. And I have to say it has been a good feeling to know that it was just me who felt this way about playing music, and being a part of something creative and substantial  in regards to the Long Island music scene. At times I have thought maybe the joy culled from those experiences so far removed is just nostalgia or my head just playing tricks on me but clearly in trading words with these folks I speak of it is apparent that I wasn't alone in feeling the profoundness of these experiences in the Long Island music scene. One such person who got in touch with me is Greg Gerardi who played guitar in Casa Negro (originally called Music- who appeared on The Hope Machine comp). He has been residing in San Diego for awhile now had been in touch with me intermittently over the years sharing with me whatever new music he was doing. I appreciated that. In fact I still spin The Challenger Deep cd he sent. Anyhow, he saw a post I made about one of the shows at the North Shore Public Library and how shows with Knox Overstreet, Casa Negro, and Lord Humongous were some of my favorite shows to play when Yes Sensei was starting out. Low and behold Mr. Gerardi has a stack of live shows that he recorded back in the day that he asked if I'd be interested in hosting on Here On This Island and considering A) I love the bands involved and B) some of the bands never properly recorded so live recordings would help at least provide a sort of aural documentation so I said absolutely.

This is a bit different from usual posts since I don't actually own the material but I feel it is just more important to properly archive this stuff. You can download the files from a Bandcamp page that Greg uploaded. He and Mario Quintero mastered this live set at Black Box Studios in San Diego, CA.

Even though I have written about all three bands before here is a brief run down of what the bands are like. Casa Negro played loud, bombastic post punk that is a lot like Shellac, Karp and GodheadSilo. Knox Overstreet were an awesome indie/emo band that meshed together the influences of Garden Variety,Superchunk, Afghan Whigs, the Replacements, Big Star, etc to create truly great rock music. The Lord Humongous played screamy hardcore that  was a blend of all the best elements of Scapegrace, The Last Crime, Rorschach, "My War" era Black Flag, and Slint.

Here is the link to the Bandcamp page. Thanks to Greg for sharing this.
Posted by soniklife at 6:13 PM